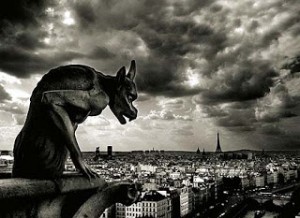 Paris is one of those places where Halloween is a smaller affair than it is in places like the States or the UK. However, that’s the reason why the French capital is the perfect destination for those who have just met each other and look for a special trip away. The City of Light hides loads of stories behind its museums, attractions and parks. From its mysterious and romantic cemeteries to the terrifying Catacombes based in the south of the city, Paris welcomes couples looking for cultural options and a high dose of passion. Forget about pumpkins and experience a city where its own mysterious history will be enough to make you feel scared!

1. Parc de Buttes Chaument
It’s the perfect place to enjoy a picnic in the summertime. However, this beautiful and huge park based in the East of Paris hides a dirty and horror-filled past as well as hundreds of souls surrounding the area – this is because during the 13th century it used to be the venue for hanging. Today it’s the fifth-largest park in Paris and it’s an amazing place for lovers to chill out in the middle of nature. Remember the park is based on a prominent hill so don’t forget your camera. You can take lovely pictures of the two of you with one of the most beautiful views in Paris!
Le Parc de Buttes-Chaumont: 1 Rue Botzaris, 75019 Paris 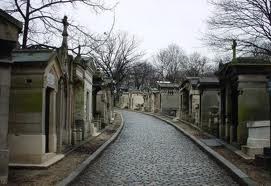 It’s still an operating cemetery and it’s also the largest one in the centre of Paris – according to official website of the city of Paris, one million people have been buried there. Walking along the graves in the afternoon can be a good way to get to know each other while sharing your thoughts about life. Pere Lachaise is probably one of the most romantic corners in Paris. It was for that reason that one of the shots in the film Paris Je t’aime was set here. Top tip: Don’t miss out Edith Piaf’s grave!
Père-Lachaise cemetery, 16 Rue du Repos, Paris

3. Les Catacombes
Located on the 14 arrondissment, they are the most eye-popping sights of Paris. The Catacombs represents a network of labyrinthine tunnels that now house the remains of over 6 million burials, removed here from the various cemeteries in the city. When you visit this place, you will easily transport yourself to the realm of Death – at the beginning of the tunnel there’s even a message that says in French “Arrête, c’est ici l’empire de la mort”. The atmosphere there is suitably morbid, so it’s definitely worth a visit. There’s no other place in the city where you could hold your date’s hand so easily!
Les Catacombes: 1 Avenue du Colonel Henri Rol-Tanguy, Paris 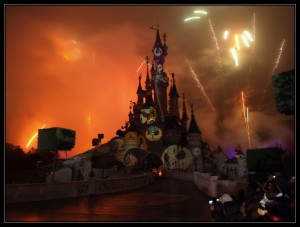 Since the 5th October, Disneyland Paris has been running special events for the most terrifying time of the year. Don’t hesitate to come if you both fancy a bit of fantasy. Here you can spend the whole day laughing like kids and of course, taking pictures with the Disney team! For accommodation options, you won’t have to go back to the centre of the city. Check out hotels in Paris near Disneyland with Expedia and discover the Disney experience by night.

5. Le Musée de la Curiosité et la Magie
That Paris is a city of museums is something that we’ve always known – but did you know there was a museum exclusively dedicated to magic? In the heart of Les Marais, the museum of the Curiosity and Magic sits in the 16th century cellars below the former estate of the Marquis de Sade. Here you can find all sort of devices used in illusions and tricks that will help you to have a fun time while trying to impress each other. If you fancy a drink after the visit, you´re in the right place! Check out La Belle Hortense (31 rue Vieille du Temple), a very trendy wine bar-library in the area. Try to pop in before 8pm as it gets really busy even during the week.

If this is your first time in Paris with your partner, there’s still another place you should visit. In the heart of the bohemian Montmartre there’s a stop called Le Mur des Je t’aime (The wall of I love yous) where you will see the expression “I love you” 1000 times in more than 300 languages. Could this Halloween be more magical?
Place de Abbesses,Montmartre, Metro: Abesses.

This entry was posted in Dating and tagged Halloween in Paris. Bookmark the permalink.